Singtel and Airtel, on 14th June 2016, announced a strategic alliance.

The development of this combined network increased FDI from US$16 billion to US$22 billion in the first half of 2015 compared to the second half of 2014. Through this partnership, Singtel also strengthened its lead as the largest IP VPN provider in Asia Pacific with strong domestic data network in Australia, India and Singapore.

Singtel currently has a significant stake in Bharti Airtel in India and considers it as one of its chief associates in the Asia Pacific Region. Lately (since 2018), due to Reliance Telecomm, Bharti Airtel has seen considerable reduction in number of subscriptions, chiefly due to migration of users from Airtel to Reliance Jio and this has reduced the share price on average for Bharti Airtel stocks in BSE.

Coincidently, Singtel stocks have also dropped in this time-period. Several expert articles have cited one of the reasons as declining performance of Airtel.

Thus, it becomes an interesting exercise to determine the cause and effect between these entities and their stock prices. We try to see if any correlation is to be found with decrease in daily closing price between Airtel and Singtel using Transfer Functions.

The data has been pulled from Yahoo finance.

The Airtel stock prices and Singtel stock prices have been pulled from 10 January 2018 – 10 September 2018. We consider the daily closing price as the variable of interest.

From the plot, we can see that the Airtel and Singtel stock prices move roughly together. 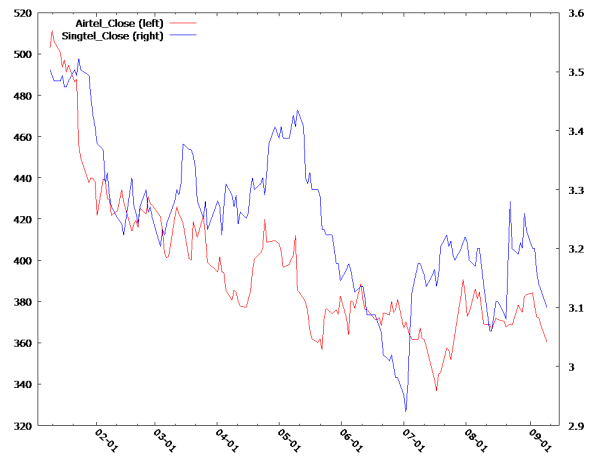 We begin by choosing Airtel_Close as independent variable.

ADF tau statistics for the causal co-variate without trend and with trend including an intercept model in either case is -2.87 and -3.17: 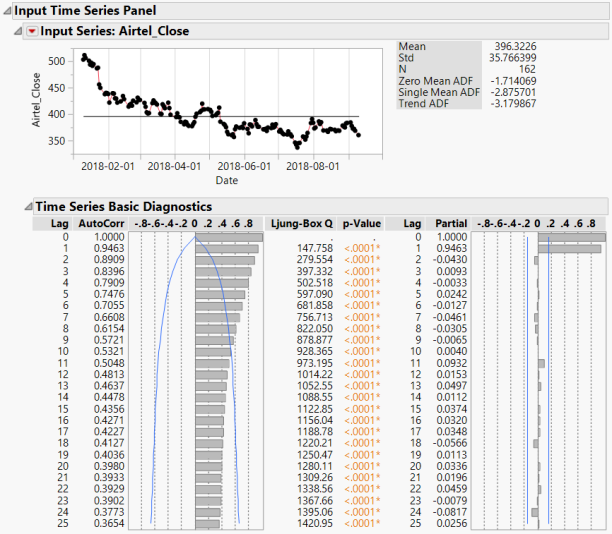 Checking for significance, under first difference, both trend and otherwise show insignificance, which may be deemed sufficient for our purpose. Thus, we select d = 1 for pre-whitening under alternative, i.e. the process is stationary under d = 1. 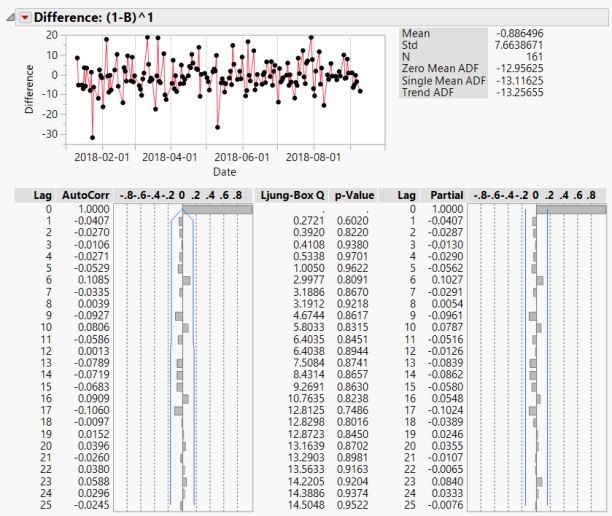 We see a non-linear decay for autocovariance. We see insignificant partial auto-covariance post 1 lag. Thus, we start by fitting an ARI(1,1) model, but the model parameters is not significant. However the residual is a white noise 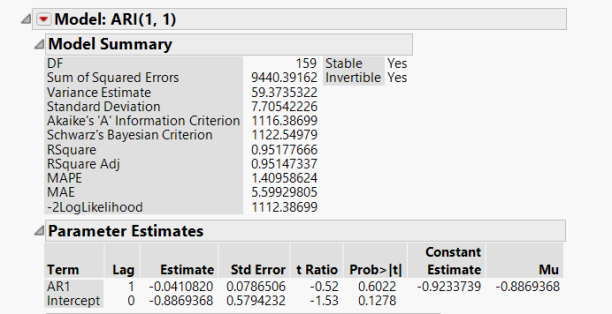 Thus, we run the ARIMA Model Group to determine the stochastic model that would give the least AIC and significant parameters. We found out the least AIC is with the following ARIMA(2,2,3) 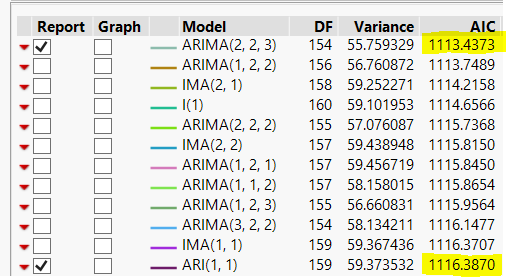 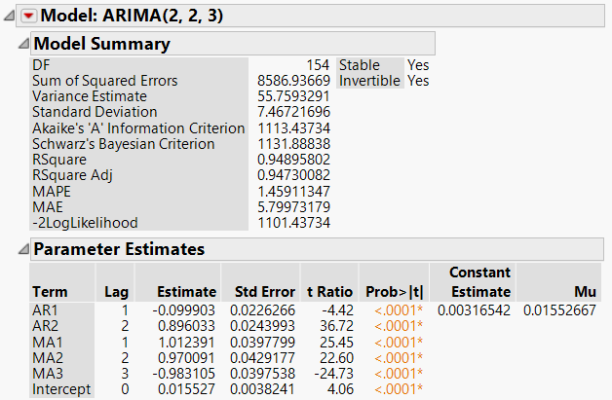 After performing pre-whitening of the time series by fitting ARIMA(2,2,3), we see significant cross-correlation between the covariates, however from lag -9  to lag -21 with peak at -15.

This indicates that our initial choice of cause and effect needs to be reversed. Thus, we proceed further with reversing the dependent and independent variable roles.

Based on the above Cross-correlation plot, we find the out that

r = 2/1 (begin with 2). Fitting the Transfer Function with these parameters yields: 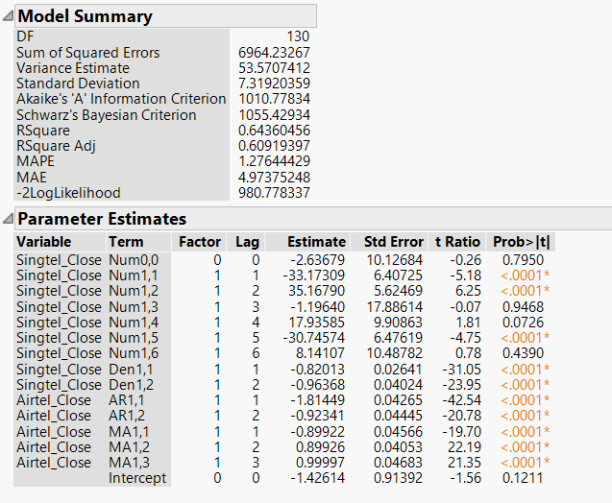 However, we find that not all variables are significant. We now try with r=1, Which gives a better model. 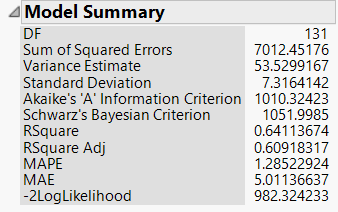 According to the National Environment Agency (NEA), Singapore’s household electricity consumption has increased by about 17 per cent over the past decade [1]. A 2017 NEA survey of 550 households found that air-conditioners were largely to blame, accounting for about 24 per cent of the consumption of a typical home [1]. However, it remains unknown if households currently use their air-conditioners out of habit (e.g. turning on the air-conditioner every day), or when the need arises. In addition, when referenced against the surface air temperature, there might be a delay in turning on the air-conditioner as our sensation of heat depends not only on temperature, but other factors such as humidity, cloud cover, sun intensity and wind [2]. Hence, the intent of this study is to investigate if there is a relationship between household electricity consumption and the surface air temperature in Singapore.

This study hypothesises that:

It was noted that “Monthly Household Electricity Consumption” records are only available till September 2015. Hence, this study utilised data from October 2010 to September 2015 (5 years), providing a total of 60 data points for analysis.

Based on our hypothesis indicated in section 2, the input series was taken to be Mean Surface Air Temperature. Initial inspection of the data reveals that the data was stationary. However, based on the time series and the Autocorrelation Function (ACF) plots, a 12-month seasonality was observed. This is consistent with the knowledge that weather in Singapore follows a 12-months cycle, largely characterised by two monsoon seasons – the Northeast Monsoon (December to early March) and the Southwest Monsoon (June to September) [3]. As such, the first step is to apply a first order seasonal differencing of 12 months to the input series.

With the Seasonal Difference Model for the input series identified in section 4.1, the output series (Household Electricity Consumption) was pre-whitened with the same model. Based on the ACF and PACF plots in Figure 3, it’s observed that the PACF plot is dying down, while the ACF plot cuts off at the first lag. As such, a MA(1) term was added to the Seasonal Difference model in an attempt to achieve white noise residuals.

From Figure 4, it was observed that the MA(1) term added was significant. The Akaike’s ‘A’ Information Criterion (AIC) was deemed acceptable, and the model managed to accurately model the 60 points to project a forecast that not only repeats the trend, but also has a tight confidence interval. The residuals of this (0,0,1),(0,1,0)12 IMA Model has also achieved white noise as evidenced in the ACF and PACF plots in Figure 5. Hence, the IMA model built for the output series is taken to be (0,0,1),(0,1,0)12 at this stage.

Based on Figure 6, it was observed that the residuals remained as white noise. In addition, it was observed that the additional MA(1) term added is not significant. This was assessed to be reasonable, as the original input series didn’t require this MA(1) term during the previous pre-whitening stage to achieve white noise. Hence, the final model chosen is a (0,0,1),(0,1,0)12 IMA Model.

With the (0,0,1),(0,1,0)12 IMA model finalised in section 5.2, the cross correlation between the pre-whitened input and output series was computed. From the results shown in Figure 8, significant correlation was observed between lag 0 to 2. Hence, the transfer function model will resemble the following equation:

where are the transfer function weights to be determined.

An alternate method to represent the model would be as follows:

In order to determine the transfer function model, the parameters b, s and r must first be identified. From Figure 8, it was shown that the first non-zero correlation starts at lag 0, which means that the input and output series are in sync. As such, b = 0. Meanwhile, the cross correlation peak was observed at lag 1. Hence, s = 1. Lastly, it was noted that the cross correlation seemed to be oscillating about 0 in the pre-whitening plot. Hence, r = 2 was selected.

Based on the pre-whitening plot in Figure 8, it was initially concluded that there was no lag between Household Electricity Consumption (y) and Mean Surface Air Temperature (x). However, expansion of the transfer function model shown in figure 9 yields the following relationship:

This shows that while there is no lag between x and y, past values of both variables also impact y. More importantly, it was observed that the coefficients of each y term are the same with itself 12 months ago. Rearranging the above formula gives the following:

This means that while yt-1, yt-2, xt, xt-1, et, et-1, et-2 and  et-3 may explain the variability in y, an offset from last year’s set of y terms is required for it to fully explain yt. This indicates an upward trend in household electricity consumption, assuming mean surface air temperature remains the same every season.

The relationship of Bitcoin with price of GPU — Transfer function —

The relationship of Bitcoin with price of GPU — Transfer function

Initiated from the creation of Bitcoin by Satoshi Nakamoto, blockchain and cryptocurrency are introduced to the public in 2009. Over the last 9 years, the price of bitcoin has gone through a roller-coaster journey in which it reached nearly $20,000 per bitcoin at the peak but plunged to $6,500 at the moment, however it did not affect its position of the highest market cap among all cryptocurrency. Inspired by Satoshi, a Russian-Canadian programmer Vitalik Buterin initiated his project of Ethereum in late 2013 and soon it became the second largest crypto globally. Just like natural gold and silver, bitcoin and ethereum require a process of “mining” to be generated. It is a computational calculation process which consumes lots of processor power and manufacturers built mining machine for such process. One key component of such miner is GPU and it is believed consumption of mining cryptocurrency has led to a change of GPU price.

A dataset was downloaded from Kaggle and it recorded the historical price of GPU chip and cryptocurrency which are cropped from price comparison website and CoinMarketCap.com.  We selected two-time series data of GPU and Bitcoin price from January 1st to March 16th 2018 to further study if there is any relationship between these two time series. There is a total of 75 records over 2.5 months of data.

JMP is used for the transfer function formation and the process is shown below:

Firstly, we selected GPU price in USD as the Y, Time Series and the bitcoin price in USD (open) as input List.

We then observed the PACF of input is cut off in 1 and filled these parameters using ARIMA model group. 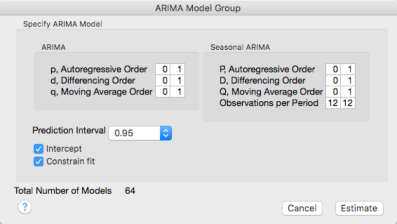 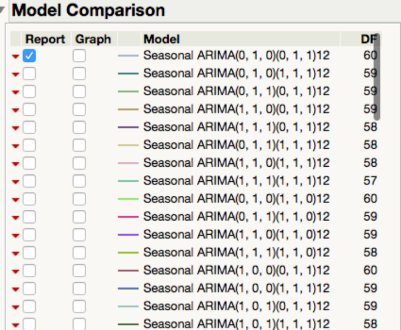 Using monthly data sourced from Singapore Department of Statistics (DOS) for period from Jan 2009 to Jul 2018 – 115 data points. The dataset consists of 2 columns. For output, we use retail index (at constant prices) for motor vehicles per month in Singapore. For input, we use the total motor vehicles deregistered under vehicle quota system. The vehicle category includes cars, goods vehicle, buses and taxis.

Using total deregistered vehicles as the input, we started by doing ARIMA and Pre-whitening on the input set. Based on the PACF graph which showed that the significance of the lag drops after lag2, we chose AR2 with yearly seasonality of period 12. 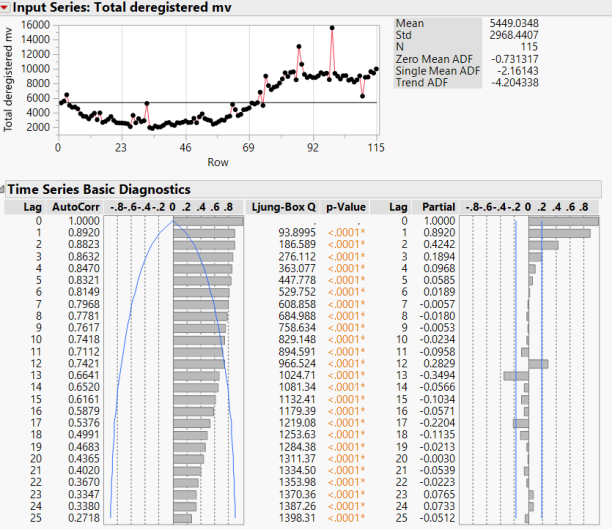 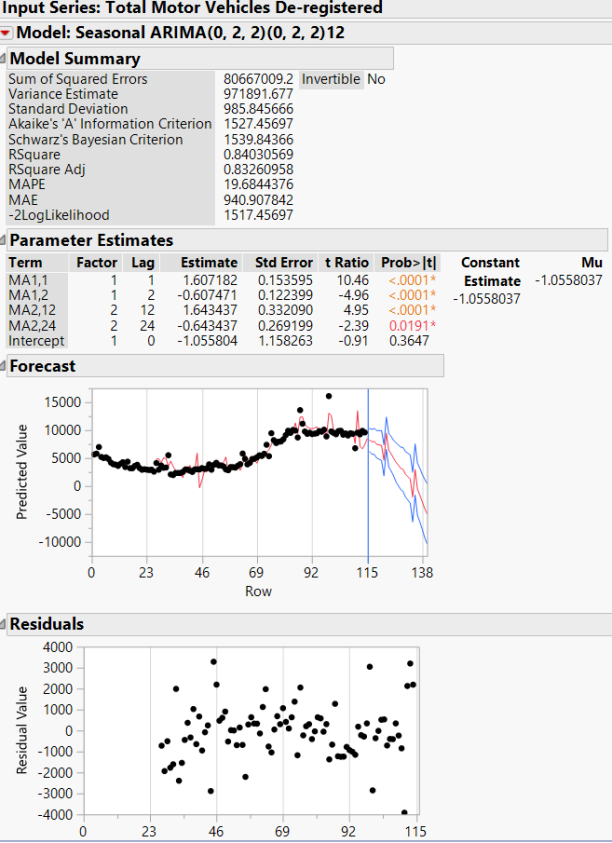 Based on the pre-whitening chart, we were able to identify that the significant auto-correlation occurred at lag3. (b=3). However, the series immediately decayed therefore s=0.

Using r=2 and s=0, the numerator for motor vehicle deregistered is set to 0 indicating that there is no correlation between the retail index and deregistered motor vehicle. The result shows that not all coefficients are significant in the formula with AIC =683.8 and SBC = 700.9. 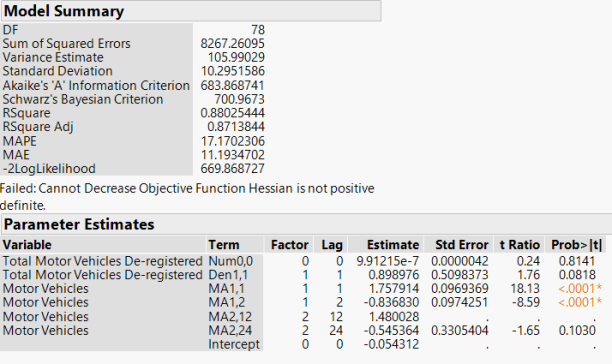 Using s=1 and r=2, we noted a negative correlation between motor vehicle retail index and motor vehicle de-registration with AIC at 678.9 and SHC at 700.8. Both measurements improved versus model where s=0. However not all coefficients are significant.

In the equation above, yt refers to the retail index at time period t and e being the error term. X refers to the total motor vehicle deregistered at time t.

Based on the equation solved, we noted that the motor vehicle deregistered impact is very small at lag3 and lag4. On the other hand, the auto-correlation of retail index is highest at lag 13 and lag 14. The highest error occurred at lag 25 and 26 which highlights that the predictive power the time series is not suitable for long term.

Our business problem is to predict total bicycle demand for the next day using different Day, Weather and past Demand information.  While Day information for the next day is known beforehand, Weather information is known only up to the current day.  Furthermore, past demand information is available only till the previous day since total demand for current day is not known before day end.  Additionally, our business goal revolves around profit maximization where loss due to over or under prediction is asymmetric ($2 for each unit of over-prediction vs. $1 for under-prediction).

We use a combination of ARIMA based time series forecasting, along with five different single model approaches. These methods are END_OF_DOCUMENT_TOKEN_TO_BE_REPLACED